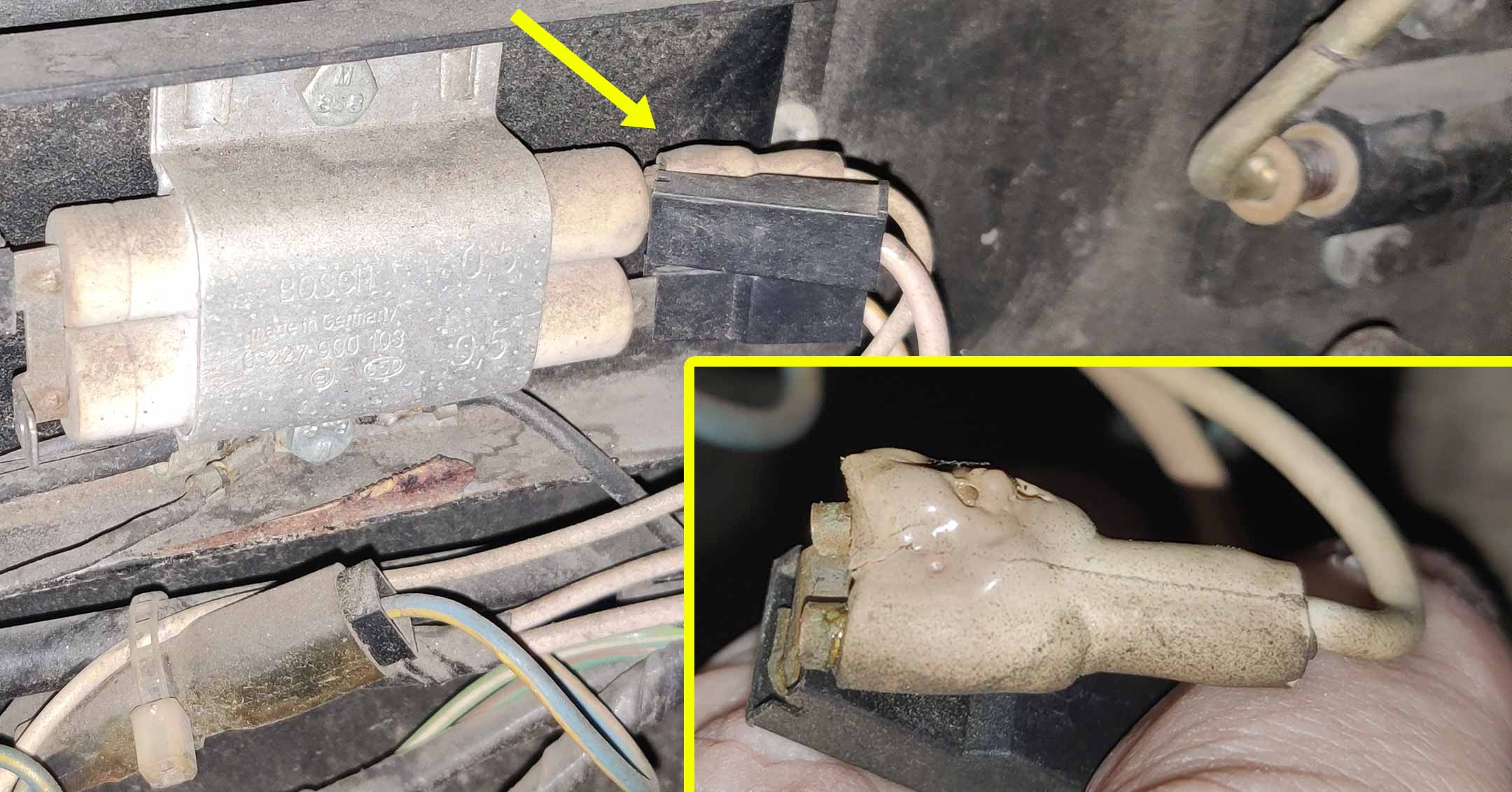 The last time I drove DMC #10515 was November 19, 2020. It was a “Dinner with the D’s” here in Vegas, and we met at a local golf center to grab a bite to eat, and maybe hit some golf balls. Of course, we never ended up hitting any golf balls. And truth be told, we didn’t eat either. We all stood in the parking lot, talking and sharing stories about our DeLoreans, and everything else under the sun/moon. As usual, it was a great get-together, visiting with other owners, and of course sharing the cars with fans walking by, who actually were going to eat, or hit some golf balls.

I say it was the last time I drove the car, because when it was time to leave (or 2 HOURS after the event ended) we finally started our cars and drove off. Which I did successfully for about… 300 feet, when the engine just -died-. It didn’t sputter or make noise. It didn’t shake or blow it… it just died silently. It also happened to coincide with shifting into second gear. Luckily, I was on a side street, so I fired it back up, and continued on… for another 300 feet, when I put it into second gear, and the engine silently died again. This time, when I tried to re-start the car, it would just crank, but not fire. UGH!

It has been 5 years and 13 days since I bought DMC #10515, and it was the first “serious” issue I’d had with the car. I was immediately stumped. Luckily, one of the other owners was still nearby, and came back to help me push the car into the parking lot to troubleshoot.  Once the car was in a space, I tried to start it back up, and it fired up as usual, and purred like a kitten. I sat there for 20 minutes, and the engine never hiccuped… it ran just as smooth as expected. So I tried driving again, but sure enough, when shifting into second gear (while still in the parking lot,) the engine silently stopped running. WHAT WAS GOING ON?! WHY IS SECOND GEAR KILLING THE CAR?!

After a short troubleshooting session (with very little knowledge of what to even check,) I called for a ride of shame. 2.5 hours later, AAA showed up and brought the car home, where we pushed it into the garage.

A week or so later I went to the garage and it fired right up. And it idled perfectly in the garage. I could rev it up, and it was fine. But, I really didn’t feel like pushing the car back to the garage from 300+ feet away, especially by myself. So the car sat. It sat for a couple more weeks, until the DeLorean Whisperer, Chris Miles, called to chat, and pushed me to go back out to the car to tried to troubleshoot over the phone. I went out, and it fired right up, as expected… but after about 30 seconds… the engine silently died. WHAT?! I didn’t even have my foot on the clutch. I wasn’t moving. I started it again… but this time it only ran for 2-3 seconds, then died. How confusing!

Since I couldn’t reproduce the problem, I really had no idea how to troubleshoot. And I clearly wasn’t smart enough to search the interwebs for the random, non-reproducible symptoms, to try to find a solution. Chris and I talked through many ideas, but after several attempts at restarting, the car would fire – but it wouldn’t stay running. If I held the starter on for an extra 2-3 seconds and rev the engine, I could get a solid ‘start’, but as soon as I released the starter, the engine silently died.

Thankfully, Chris Miles persisted over the following weeks, trying to get me out to the garage tokeep trying things. It wasn’t until yesterday that he succeeded. He wanted me to find my original RPM relay and try that, to eliminate any ideas that the new relay was the issue. (I installed Dave McKean’s solid state RPM relay – which will also run the fuel pump for 1/2 second, every hour, for three hours, to keep the fuel system pressure up, which makes it easier to start if you have the ‘hot start’ problem.)

So, with the original RPM relay in one hand, and the phone in the other hand with Chris on the line, I walked to the DeLorean, swapped the relays, turned off the battery cut-off switch, and crossed my fingers before starting the car. Nope… It would fire, but it wouldn’t run.

Chris had me take the airbox off and check the pressure of the fuel mixture control unit by pushing down on the plate, to see if the fuel system was pressurized. That seemed fine… but without knowing what it SHOULD feel like, I wasn’t sure if it was fine. So I took everything out of the trunk, to try and HEAR the fuel pump, to make sure it was actually pumping fuel. At first, with the original RPM relay, I couldn’t hear the fuel pump. Then Chris said to Dave McKean’s relay back in, and sure enough, turning the key to the ‘ON’ position, I could clearly hear fluid being pumped through from the fuel pump. UNfortunately, that also meant (probably) meant that fuel pressure wasn’t the issue. So what was it? Jack Behar had suggested a few months ago that it would be electrical, but that’s as far as that conversation went.

While sitting in the driver’s seat, we talked through some more ideas. Then the DeLorean Whisperer came back to a previous idea he had about the ballast – but since I had “checked the connections 6 months ago,” he didn’t think that would be it. Thankfully, I said “but,  But, lemme check it again.”

I climbed out of the car, and went to the ballasts. I pulled the connector off the left side, and there was no corrosion or signs of burning/melting, so I put it back on. Then I pulled off the piggy-back connector on the right side, and again, no signs of trouble. Then… when I tried to pull the connector off the blade on the right side, I couldn’t get it off. I pulled, but it felt like a rubber band pulling it back onto the connector. Then I got a good look – the plastic SHIELDING around the female blade connector was ‘melted’ to the blade (causing the ‘rubber band’ effect) – but the female connector was NOT on the blade itself! It had only been TOUCHING the blade, as the SHIELDING was squeezing the two parts together!

I’m telling Chris this moment by moment, and before I truly realized what I was seeing, he proclaims – “THAT’S THE PROBLEM! I helped someone else who had the SAME THING happen with their ballast connector!”

With no other noticeable damage or corrosion, I pushed the female connector on and off the the blade a few times to clean it up, then made sure all the connectors were secure, and got back into the car. And yup… it fired right up – and kept running!

I sat in the car, with it idling for another 20 minutes with no issue. I turned the car off and restarted it several times, with no problem. Who knows when, in the past 40 years, did someone NOT put the connector on properly – but it was just enough to keep the spark going to the plugs… until it wasn’t.

Today, I took the car out for a drive, and it ran just as well as it always has in my 5+ years of taking care of it. And I can’t be more thankful to Chris Miles for his help, and encouragement to keep troubleshooting. I’m also incredibly thankful that in those 5+ years, I’ve only had a couple of “significant, small” problems with my car, and I’ve been able to enjoy it, and share it with others.

Since I picked up the DeLorean, the shifter boot has always been flopping around. It no longer stayed in place, so when shifting, the boot (also called the “gaiter”) would

When I first bought #10515, one of the four rims had been replaced by the original owner because it had been damaged. But, the replacement rim was a grey rim,